When Is a Pothos Not a Pothos?

When is a pothos not a pothos? The answer is when it’s an Epipremnum aureum.

Actually, there are several answers to this question. Others include when it’s a Scindapsus aureus, Rhaphidophora aurea, Philodendron nechodomii, or even a Epipremnum pinnatum v. aureum. And then there is also devil’s ivy, devil’s claw ivy, ivy arum, golden efeutute, hunter’s robe, money plant, Ceylon creeper, taro vine, Solomon Islands ivy, and centipede tongavine to name a few. Any combination of any of these plants are simply referred to as a “pothos.” Maybe we should call it The Little Jungle Weed That Could.

In 2004, aroid botanist, Peter Boyce, established that the Epipremnum aureum’s origin was on Mo’orea Island, French Polynesia. So we’ll assume that’s its home ground. It was just one of the legions of liana, the name for woody climbing tropical vines, but it had big plans for the future. All this plant needed was for one little piece of its foliage to get broken off, float away on a piece of tree limb to a neighboring island, get caught up in a piece of clothing, and it was off and running.

In the wild, Epipremnum aureum can grow up to 66’ long with stems 2” in diameter and leaves up to 39” x 18”. The stems grow up on trees, clinging by means of aerial roots that are specially adapted to adhere to surfaces both rough and smooth. Once the stems grow up to the areas of dappled sunlight, they grow along branches for a while then grow back down to the ground where they travel along searching for new trees to climb.

The plant became a master of vegetative propagation. As soon as the little broken piece found itself in any kind of soil at all, the nascent aerial roots could immediately turn into functioning underground roots, establishing a new plant wherever it might fall. Because of E. aureum’s ability to grow in many types of soil, levels of moisture, and its varying colorations, it was practically guaranteed a place at the top of the potted plant school. 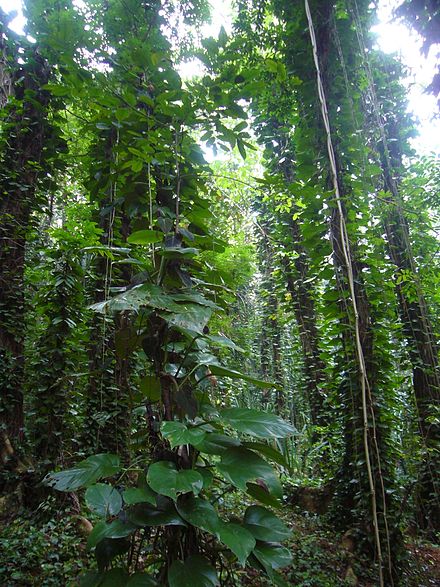 This adaptability would serve it well on its journey around the world. Besides practically founding an industry and being a favorite for aquariums and lizard habitats, it has been declared an invasive in the sub-tropics—Hawaii and Florida, to name two. Not only that, it has swallowed whole forests in Sri Lanka and other tropical areas.

One thing the Epipremnum aureum gave up along the way, though, was the reliance on propagation through seeds. In common with other aroids, the flowers are tiny and are produced in a group on the columnar spadix protected by a modified, often colorful leaf called a spathe, which can be as much 9” long. Unlike other plants in its family, E. aureum has somehow managed to reroute the energy typically used for making seeds into vegetative reproduction. In the wild, its flowers are rare enough. In the civilized world of botanical gardens, they are hardly ever seen. And as a potted indoor plant where the “pothos” has come to reign supreme in its juvenile form, flowers are unknown.

The lack of flowers is the source of the profusion of botanical names. Flowers in the aroid family are similar, distinguished from each other by very small, often microscopic differences. The early French botanist, Antoine-Laurent de Jussieu, in his great work of 1789, Genera Plantarum, listed all the climbing aroids of Southeast Asia as “potho.” In 1880, Linden and Andre named the plant Pothos aureum. In 1899, a French doctor and botanist did name it to its current genus, Epipremnum mooreense, but it took another 65 years for the rest of the world to catch up with him.

In 1908, the eminent botanist Adolf Engler placed our favorite little jungle weed into the Scindapsus genus. He was able to study some flowers in the botanical collections in Germany and everyone was content with that classification for many years. Finally in 1962, the pothos at the botanical gardens in both Puerto Rico and Miami flowered. Monroe Birdsey, a noted botanist and Araceae expert, was able to examine the inflorescence microscopically and realized they were not Scindapsus at all. At first he placed them in the Rhaphidophora group, but later determined they belonged with the Epipremnum. In 1964, George Bunting codified that classification in the Annals of the Missouri Botanical Garden.

Of course, botanists in different parts of the world seem to be attached to different classification systems, so you’ll see all the names in use. Because the plants in the Pothos genus (around 65 of them) look nothing like our friendly neighborhood “pothos,” that name has been pretty well dropped by the experts in such things. However, the landscape and houseplant worlds still use the term “pothos.” Go Figure.

All agree that the plant is a member of the Araceae family, also known as aroids. It is also classified as a member of the Monstereae tribe that contains 3 genus – Rhaphidopora (100 species), Monstera (50 species, native to the Neotropics), and Epipremnum (15 species).

The current botanists’ debate about pothos seems to be whether aureum is a species of its own, or a variation of E. pinnatum. If you look at the mature leaves, however, there are obvious differences between pinnatum and aureum, so I’m inclined to go with the separate species camp. When you see references to the botanical name, though, they seem to evenly divide between E. aureum and E. pinnatum. And lastly, for one final bit of the name game, a ‘silver satin’ pothos isn’t a pothos at all. It’s actually a Scindapsus pictus.

Marlie Graves, known as The Ficus Wrangler, has been keeping plants beautiful, training techs and relating to clients at half a dozen companies for 30 years. She studied creative writing and psychology in college and went on to start an independent film company with her first husband. She decided to focus on plants full time after completing the NYBG Horticulture School interior landscaping course. Marlie is retired, operates "The Ficus Wrangler" YouTube channel, contributes regularly to several houseplant forums, and is working on a plantcare book based on professional methods.