Green roofs were considered a wonder of the ancient world.

In 2014, Green Roofs for Healthy Cities (GRHC) ranked the top North American cities according to that year’s installed square footage of roof top green space. The top five were: Washington DC, Toronto ON, Philadelphia PA, Chicago IL, and New York NY.  It is not surprising that the leader by far, with over a million square feet, is a city well known for its monumental architecture.  In the case of Toronto, the implementation of bylaws in step with rapid real estate development appear to have driven the trend upward to 800,000 for the year.  Philly is on the record as aspiring to be the greenest city in the US and installed over a half a million square feet, the recently deceased ex-Mayor Daley of Chicago helped provide impetus and a good start in that city years ago with some of the proceeds of the Con Ed award. NYC is of course home to the 2.5 acre rooftop soil farm masterpiece known as the Brooklyn Grange.

Each of the leading Green roof cities, and many more, share common traits, including an acknowledgement that green roofs help mitigate and remediate the undesirable aspects of contemporary urban development such as the heat island effect, storm and waste water management, excessive energy use and concomitant air pollution as well as contribute symbolically and tangibly to the adoption of the sustainability ethic western society is currently struggling to accept. Although it may seem to be a questionable architectural approach to some, it’s significantly efficacious root system stretches back to the dawn of civilization and for that reason alone warrants consideration.

“Babylon surpasses in splendor any city in the known world.

Often times what we think of as new and innovative is in fact not novel at all. Herodotus made the statement above in reference to the Hanging Gardens and other horticultural, agricultural and architectural marvels reported in his inquiries into the Greco-Persian period in Mesopotamia in his one and only treatise, Histories, written over three decades in the 5th century BCE. He is considered the father of western history, his sole work being the oldest intact work of western prose known to exist.  His words have long been disputed and debated in historic discourse, beginning with his contemporary Aristotle, later Cicero and extending to the present day in the work of Dr. Stephanie Dalley of Oxford Universities Oriental Institute.  After three decades of work, Dalley has painstakingly pieced together the evidence to clearly demonstrate that the Hanging Gardens did in fact exist, however, they were located  in Niveh (modern day Mosul), 300 kilometers north of Babylon (modern day Bagdad) and were built after the Assyrian king Sennacherib conquered Babylonia in 689 BCE. In fact, in his attempts to assert superiority in both northern and southern Mesopotamia, he destroyed Babylon, including the temple complex, and then renamed all the gates in Niveh after the gates of Babylon. In short order, the city became known as new Babylon and this vital element was misinterpreted by many, including Herodotus. The fact that Babylon was part of a coalition that invaded and sacked Niveh in 612 BCE only added to the confusion. Babylon once again rose as the dominant regional center and remained so until the Persians invaded. 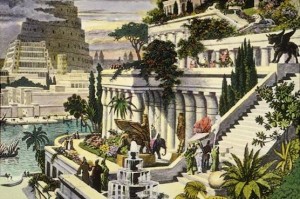 Evidence exists to indicate sedentary agriculture, and the development of increasingly complex regional culture in Mesopotamia, the so called Fertile Crescent, since about the 4th millennium BCE, evidence of habitation extends to the 6th millennium BCE in the region of Niveh.  Similar evidence exists in other regions like the Yellow river valley in China, the Indus river valley in present day India, the Nile river delta and Sudan in Africa and the Andean plains of South America. In the old world, these developments coincide with the transition between the Neolithic and the Bronze Age. In each instance there is a gradual but steady increase in technology and societal stratification. In the Fertile Crescent, however, this evolution was not disrupted, to the same degree, by significant environmental changes that appear to have occurred around the second millennium BCE which led to large scale movement of populations and re-settlement in Africa, India, and South America.  By this time the complex city state meta-civilization  of the fertile crescent had a demonstrated mastery of writing, astronomy, metallurgy,  architecture, agriculture (including large scale water management-  also appearing in China at this time) municipal administration and art. All of this was made possible by the Tigris and Euphrates and the fecundity of the alluvial plains of central Mesopotamia.

The hanging gardens of the new-old Babylon were in fact the first example of green and blue roof technology employed in urban planning.

Dr. Dalley and others have excavated areas in Niveh and uncovered the ruins of aqueducts, auger screws for water lifting, reservoirs, reinforced soil vaults leading to roof top planters for large trees, and from the thousands of cuneiform texts uncovered over the past several decades, descriptions of the use of bitumen, asphalt, lead sheets, and sun dried and kiln fired clay bricks used to construct the various  impervious membranes utilized to deliver the water to the city and retain the growing media employed on the roof tops of a massive series of ascending colonnades. The structure rose to a height of approximately 75 feet and extended in a roughly semi-circular pattern almost 450 feet in diameter. Each level featured a variety of plants, from field and forest alike, a lake at the base completed the massive re-creation.  The surface area would be roughly equivalent to 100,000 square feet, and included multiple cascading water features.

Monumental architecture has always existed for specific cultural reasons; these creations are constructed during times of accelerated change as a means of cultivating cultural unification and revitalization.  When viewed through the lens of present day perspective, we can see that the rulers of Niveh were attempting to demonstrate continuity in the mastery of elemental forces in the face of significant and accelerating cultural and environmental change. The Hanging Gardens were described by Sennacherib himself as” a wonder for all the people”. They are the first proven example of what could be referred to as agritecture;  demonstrating technological and administrative prowess with respect to urban planning, information technology,  watershed management and of course  state of the art utilization of intrinsic and extrinsic resources. The significance of the undertaking lies in the fact that we can review the design and it’s rather complex context, in detail, 2700 years later and discover contemporary relevance.

The problems experienced in the cradle of civilization are still manifest throughout civilization today, albeit orders of magnitude greater. People are drawn to urban centers now for the same reasons they were in antiquity. Growing populations have resource needs that must be fulfilled. High density urban development precludes traditional agriculture for obvious reasons. As a result, we have been forced to go farther and farther afield to acquire these resources creating complex distribution systems and infrastructure that require immense effort and resources to maintain. This has always been the point where civilization falters. Today, we have the technological tool kit and a growing awareness that we could, and should, produce as much of our food as possible within urban centers.  Every urban center in the world has an abundance of suitable roof top space capable of being brought into production for food or simply for water retention and treatment or solar energy collection.  North America is a global leader in greenhouse automation and food production. Urban farms need not be traditional soil/row cropping like the Brooklyn Grange.  Numerous containerized systems exist. In Montreal,  Lufa Farms has two profitable state of the art hydroponic greenhouses, comprising several acres, operating on roof tops. Various aquaculture systems linked to interiorscaping and roof top garden systems are being developed, as are native plant based air and water treatment systems.

Urban and traditional horticulture professionals are the vanguard of the movement; working closely with architects, engineers, biologists, urban planners and governments at all levels to implement agritectural changes that seek to optimize efficiency and revitalize urban settlement.  The approach is nothing short of monumental and will serve as the modern day exemplar of the fusion of what Giambattista Vicco, in The New Science, referred to as the three human institutions; the forests (nature), the huts, and the academies.

Chris is a plant biologist and forester who has dedicated over two decades to plant ecology research in addition to acquiring almost 20 years of experience in the garden center and florist sector. He graduated from Trent University with an Honours degree in plant biology and from Sir Sandford Flemming College with a diploma in Forestry. As an ecologist, Chris has been involved in many projects, large and small, from government directed natural resource management audits and climate change research with carbon sequestration in permafrost peatlands to natural vegetation restoration following disturbance. As an garden center and florist business owner in the Lower Mainland of British Columbia, he has born witness to the tremendous change that has occurred in the horticulture industry over the past twenty years.

Choosing the Most Durable Outd...